Part 4: Journey to Princess Rose Petal Back to the Hotel. Some Hard to Read

Part 4:  Journey to Princess Rose Petal Back to the Hotel. Some Hard to Read

You can find parts 1-3 here:  http://borninyourheart.com/

Before we arrived to the hotel, we had lunch.  I had remembered her being given our left overs earlier. The Rose would have her first pick of foods. WOW, did she eat. I think more than her weight. We were told that she was accustom to just two- three small bowls of rice a day.  She stuffed her little mouth so full.
At one point during a meal, Daddy had to reach in and get some of the food out as she was choking.
Even that did not slow her sown down.

We got back to the Hotel. We played and had a bonding fun time. We noticed that she rattled when she breathed and her chest was vibrating. I was sure she had the pneumonia. We took down her hair and decided to see if she would allow us to give her a bath.  Our precious Butterfly went first to show her it was ok, and how we would bath her. She striped off her clothes, all 4 layers of them faster than Houdini. She wanted a bath. What we would see sent me away to cry in private. She had sores all over her little skeleton of a body. She had scratched them so much she had infected several of them. She was an itchy mess. She also had battle wounds of all kinds. Some of them were from being tethered (tied down to be kept in place) and others unknown.  We already knew from readying and observing that this was a common practice.  This was probably in her early years. The Hotel lobby had a really BIG teddy bear. He was in a pretty red chair. I watched her run up to Him and quickly tie his hands to the chair with the ribbons hanging off of him. That told a heartbreaking story. The smell that came from the sores on her body was very foul. It was a rotten type odor. Her chest rattle was even louder than ever without the cloth to buff it. I was sure her rash was scabies. I had a treatment for that with me. During her bath, she scrubbed and scrubbed herself for more than 1 hr. Just over and over. Three warm tub fills of water.  Each time the color was less and less dark brown. She was delighted with the warm water and her first bath.  Daddy took care of most of this while I was working on a doctor.  My loving husband sat with his knees on a hard floor, while she took her bath. We took her to a clinic. They were not sure about the rash. They gave us some medicine. They also were unsure of the chest rattle. We got some meds for that too. Now that much time has gone by, I know that the rash was food allergies. We would have years of working out her body to accept foods.  But Thanks be to a healing God, we have pretty much made it!  Her breath smelled like ammonia. I was sure she had some kidney thing going on. I could smell her stomach. Something was not right. Our child was in so much pain in her gut, it broke me. It turns out after MUCH testing that she had an

After her bath, she loved being clean, taken care of, and having new PJ’s that matched sissy’s. We needed to be careful about that rash….I was pretty convinced it was scabies and treated her for it.L   She had so much going on; I was on high alert to protect the Butterfly. I had brought bleach wipes with me, so to add to the all of it. I became a cleaning freak.

Guess what we discovered. She has naturally wavy hair. It is so beautiful.  We were so amazed at just how perfect she was to us.  During the first handful of days I would be stretched in ways I never knew I could be. She decided that I would be all hers! AND glued herself to me. She rejected Daddy and would share her things with the Butterfly but NOT ME.  She threw the best tantrum fits I had ever seen and a lot of them. Like 10 or more a day! Kicking, screaming and rolling around.  She would eat any and all food that she could find, even off of the floor. That was really hard to watch. She would stuff her mouth so full that it would ooze from her mouth. I finally had wrapped her in a towel while she ate. She had zero eye and hand coordination and would spill everything. She also could not walk more than a few feet without falling to the ground. Her muscle tone was minimal. Her eyesight was obviously bad.  She was a hitter and her target would be Daddy.  In all of this, she was also sharing, loving, nurturing, and really trying very hard. We could see her embrace our training, disciplines, and love and that encouraged us. I had MANY melt downs. I was so ready to be HOME.
Jim’s maturity was unreal. He took each hit, smack, and issue in complete love. He knew that she was a treasure and that things would be changing. He, like our God, looked for the bigger picture of who she was. I was in freak-out mode.  AND then, I watched her sleep. Honestly…it was a highlight at that point. I was still sick myself. I also can recount how small and immature I really was. It is when you are called to something hard that you see yourself for the first time.
We were all settled in one night and then she sat straight up and began to scream and thrash and moan the most awful heart wrenching sounds I have ever heard. It immediately put me into a fear and trauma mode. I thought it was grief. It was NIGHT terrors. She was totally asleep and had no idea. After we got her settled ½ hour later, she slept peacefully. But we would have this for more than a year and often.  After that first attack, I would spend the next hour trying to pray and settle Jim down. He had become so angry at the thought of what all might be behind her terrors. He wanted to hurt someone. After some time home, I am happy to report that in HIS mercies …He healed her from those night terrors…and they went away. I fell in a deep love with her for all that she had been through after that first night terror. I knew then that I was the one that needed changed and that I would be battle worn and never the same. But, I got a new resolve and I would roll up my sleeves and work this through with Jim at my side.

We also discovered that she could not handle much. Going anywhere was too much for her. Certain fabrics would scare her. She had been pretty much confined to an area most of her life and noise, smell, sounds, and stimulus terrified her. She has DONE amazing works to push past all of this over the last three years. I am so proud of her. She is my hero. 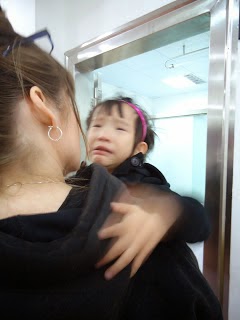 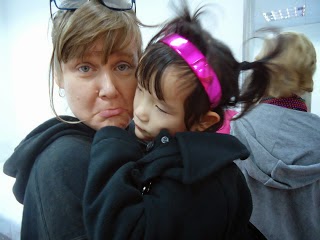 All during our hotel stay she would go to the bathroom and get a towel and begin to scrub the walls down? What was this motivation?  Did she feel she needed to clean to keep us? Or was this her regular job? Sometimes we would help her; other times distract her away with play.

She was so empty emotionally. She could NOT get enough love. She needed held and loved every second of every minute. It would take its toll on us. BUT, He carried us through it. Her love tank was past empty. Funny thing is, she is now so full and overflowing that she freely gives it away.

She could not be more precious or perfect. She never invited life’s harshness to herself. She was voiceless and had no say.

Our time in the hotel was hard. But, each day she gave a little and so did I.   She was learning to trust us. I admired her bravery so much. How could she know we had anything to offer her, if not for God’s work in her?

I remember arriving at the Hong Kong Airport. As the doors swung open the hallelujah Chorus began to play. It was as if it had been waiting for us. I began to feel soft drops of water roll down my cheeks. Thank you God!
She traveled like a champ across the oceans to a home that she had hoped would be hers…and it was waiting for her. 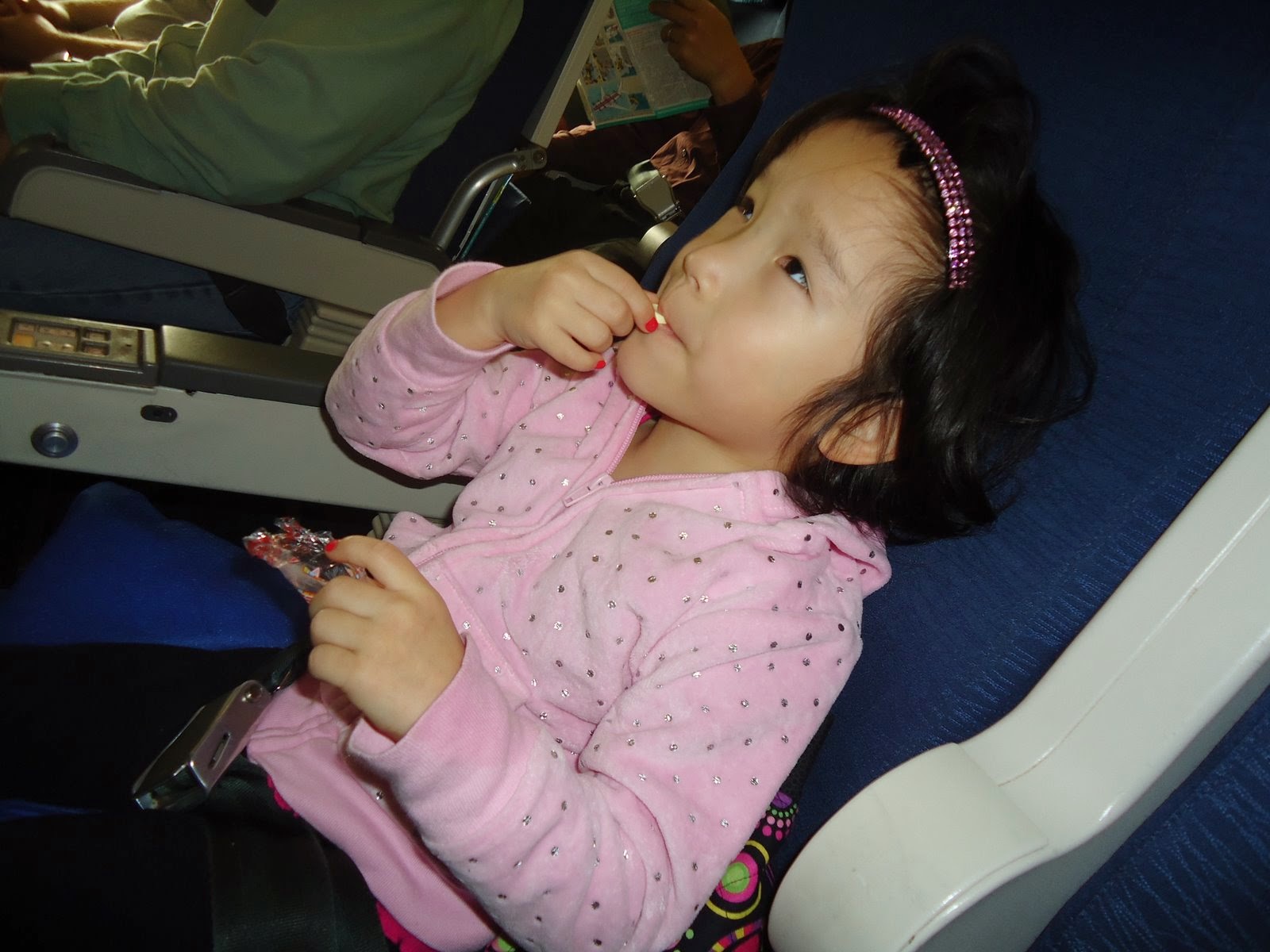 Come back and I will give you a glimpse of our first year home and who she is now.
Then I want to wrap this up to the very important reason I am sharing all of this with you.

Visit our site at www.borninyourheart.com