It is a heartfelt story of three continents, two people "Born that way." 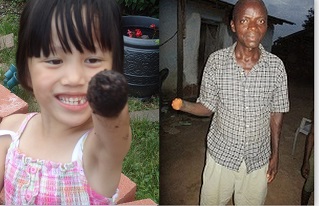 Simply amazing to me...the unlikely connection across the globe. So glad I have been a small part of this modern day miracle.

Hefei, China, 2008
The story of the Well at Wli spans three continents as God used an orphan girl from China and adopted in the United States, to be the avenue of life-giving water to a village in Ghana.   On October 6, 2008, Rui-Qi, who would later be affectionately known as "Princess Peachtree" by her family, was abandoned on the ground in a public area when she was just a few hours old.  A police officer found Rui-Qui and delivered her to an orphanage where she would remain for the next four years.
We do not know what made this desperate person abandon her baby that day, but maybe Rui-Qui's "uniqueness" overwhelmed her.  Rui-Qui was born without a lower left arm and hand, missing fingers on her right hand and missing toes.  The future is uncertain for infants born in China with birth defects and 30 percent die within five years while another 40 percent suffer with their deformities and may not receive needed care. As she waited in that orphanage in China,  Rui-Qi often cried for a mommy she loved but had never known.

Visit our site at www.borninyourheart.com